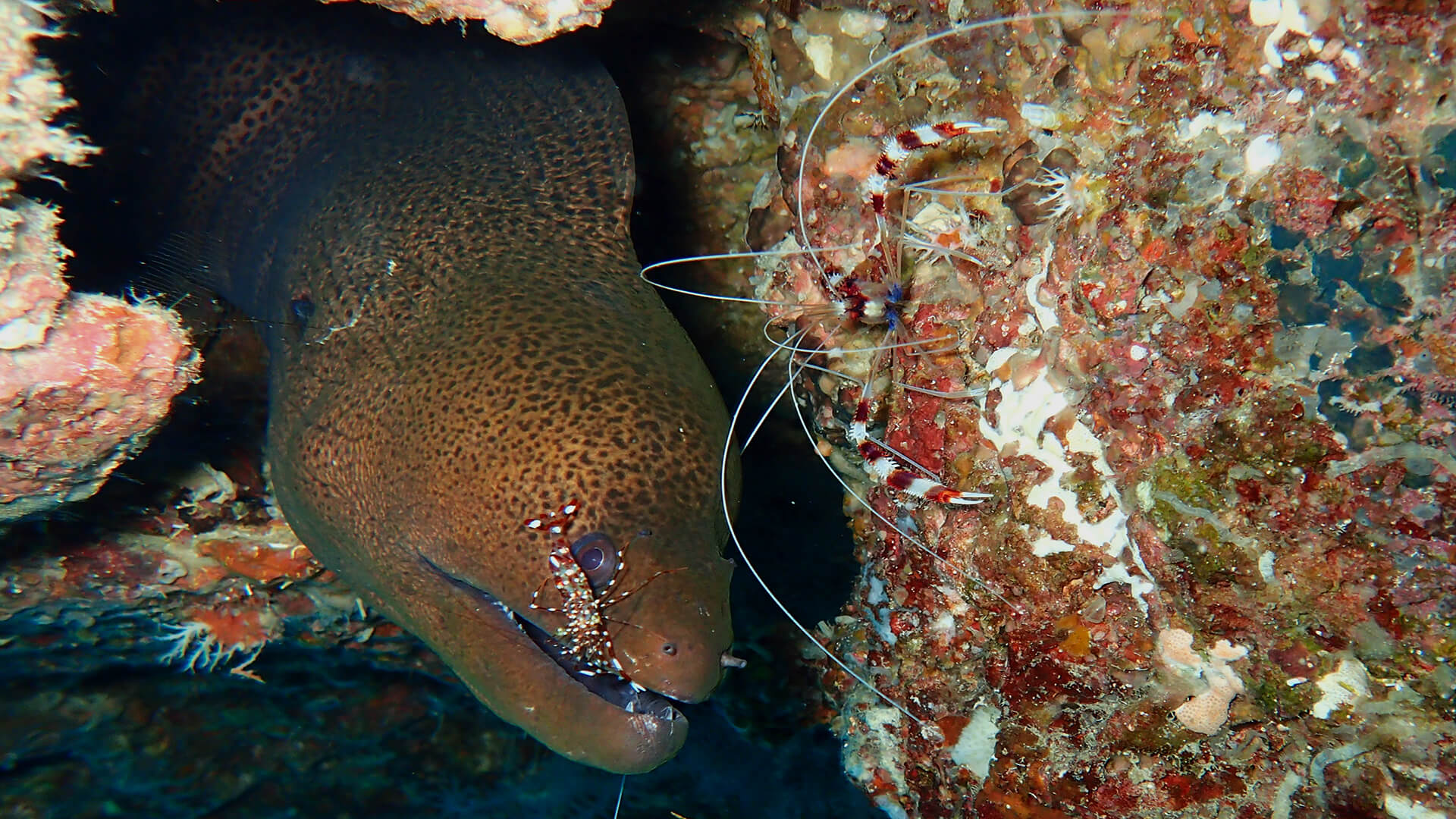 Every Phuket diving site has one of these blissful underwater health spas where the food chain is put on hold for a little while and everybody just gets along. A Utopia under the waves. Most divers will swim over them completely unaware that it’s the best place on the reef to witness natural behaviour, species interaction, some killer dance moves and even marital disputes.

Why Do Fish Need Cleaning?

You’d think spending your whole life swimming around in water would negate the necessity for a spruce up. However without hands then cleaning your teeth, cleaning wounds, removing parasites or simply exfoliating are all a bit of a challenge to say the least. This is where the legion of little helpers come in. It’s a competitive world down there and everything needs to be in perfect working order to survive.

As well as the daily wear and tear from constantly dodging teeth, poisons and flailing divers. When a fish tucks itself into a crevice for the night it picks up annoying little hangers on called ectoparasites (think bed bugs that don’t let go). They usually congregate around the gills and fins where the blood is easier to access. This is where you’ll see the most vigorous attention. Very often the underwater health spas customers will flair their fins and gill covers to allow easy passage. For this reason early mornings are the best time to visit the stations but there’s usually activity throughout the day.

The most obvious and a fish that everyone has seen is the bluestreak cleaner wrasse (Labroides dimidiatus). They flash their distinctive stripe pattern (blue streaks if you’re wondering) in an eye catching dance routine above the cleaning station that lets all the reef fish know that they’re open for business. These industrious little fish can eat more than one thousand ectoparasites in one day. Dead skin and rotten flesh around wounds will also be consumed.

The blue streak team comprises of either and adult pair, a bunch of unruly youngsters or a group of females with a dominant male. The difference between adults and juveniles can be seen in the picture above. In the adult groups the male runs the show and has been seen to chastise the females if they nip a sensitive area and scare off the client. Some fish have their favourite cleaning stations and have been known not to return if they receive poor service. The customer is always right…

Pacific cleaner shrimp (Lysmata amboinensis) are another one of the common therapists we see in Phuket. They also have a display dance and their long white antenna can often be seen waving around outside their holes. A signal to any passing fish know that space is available. 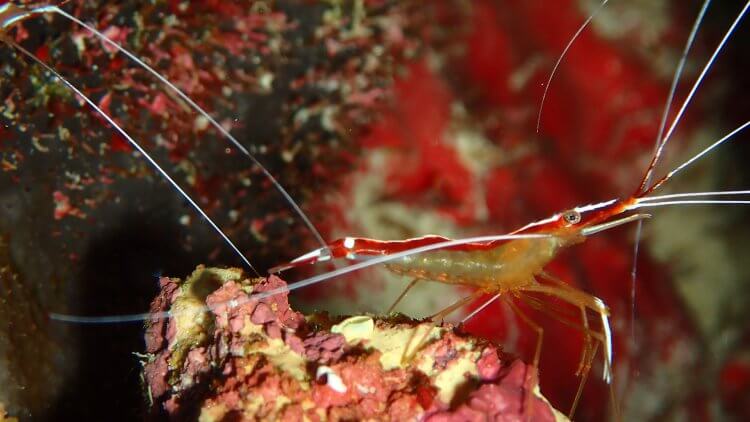 The cleaners are left alone by most predators (except frogfish, frogfish don’t follow rules) and predator and prey often mix at the stations. Sometimes a very orderly queue can be observed. So it’s quite possible that a gaping wound on the side of a fusilier was caused by the sheepish looking barracuda who’s next in line. Some fish are a bit greedy though and moray eels will often sit in the same cleaning station for hours.

So confident are the wrasse and shrimp that even divers can be treated to a little attention. The wrasse will often nip at any wounds a diver may have. They also have an annoying habit of going in your ears, possibly thinking it’s our gill openings. If you put your fingers near cleaner shrimp they’ll jump on and start picking away at the dead skin around your nails.

Next time you go diving in Phuket. Spend a minute or so hanging around a cleaning station. You’ll see a lot of activity and many of the interactions mentioned above. 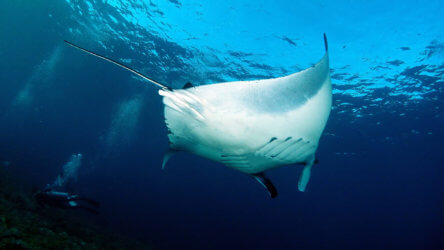 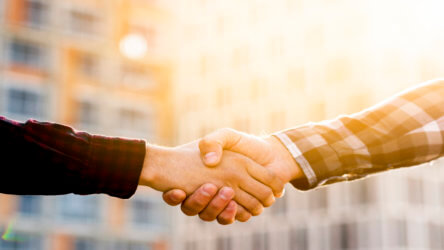 The much heralded Phuket Sandbox scheme did bring in some extra income for Phuket's beleaguered tourism sector but it was nowhere near enough. Changes had to be made and from October 01st we will see some easing of restrictions. We're still not where we want to be but none the less the changes are welcome and we hope it will boost the appeal for a holiday and diving in Phuket. The changes for the Phuket Sandbox were officially published in th [...] 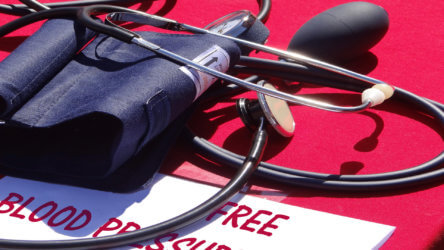 Am I Fit Enough To Scuba Dive?

Being fit enough to scuba dive is not that difficult. You certainly don't have to be a perfect physical specimen. Once in the water it's possible for anyone to achieve neutral buoyancy. Your weight, age or general physical fitness makes no difference with this aspect of scuba diving. There's plenty of physically impaired divers around who just need help getting in and out of the water. The diving community tend to be a helpful bunch and are a [...] 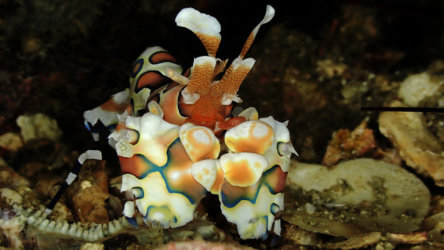 Sure harlequin shrimp are incredibly beautiful, a rare sight that excites guides as much as guests. However they do have a very macabre way of filling their little shrimpy bellies. They are reasonably frequent finds on our Phuket dive tours and have been spotted from the Racha's to Phi Phi. Harlequin shrimp are very difficult to find, it's usually just sheer luck but occasionally a maimed starfish or two can point you in the right direction. [...]