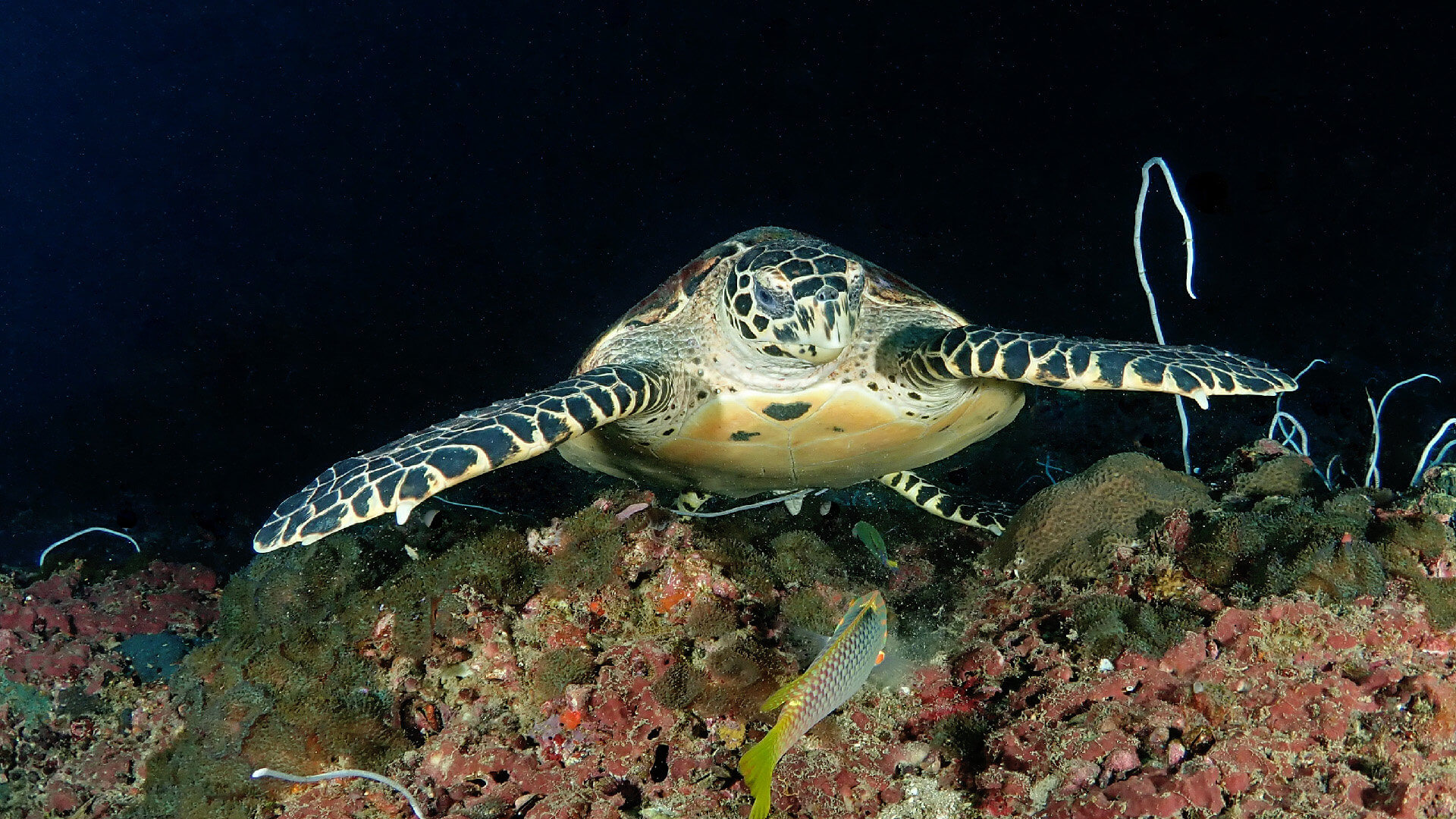 Turtles are endearing creatures and we’re lucky enough to find plenty around Phuket. Their slow movements, tolerance for divers and wisened features make them a firm favourite with divers all over the world. We mostly get hawksbill turtles around Phuket but we also get green, loggerhead, olive ridley and the biggest of all the seven species – the giant leatherback. Unfortunately all are endangered thanks to us… Plastic pollution, destruction of feeding grounds and development on nesting beaches all take their toll. It’s not all bad news for turtles though. After many years of protection some species have slightly increased in numbers.

We have to hope that sea turtles survive us, after all they’ve been on this planet for over 100 million years. Some species live to over 100 years old so conceivably there’s turtles around Phuket who’ve met the great Jacques Cousteau underwater, would explain the distinctly unimpressed look they give us.

So called because of their narrow pointed beak are by far the most common sea turtles in Phuket. In fact if you dive at the aptly named Turtle Rock you’re almost guaranteed an encounter with these wonderful creatures. They can turn up anywhere and offhand I can’t think of a dive site where I haven’t seen at least one.

Hawksbill turtles were and still are to a lesser extent today hunted for their shells. If you see ornaments or jewellery in a market labelled as tortoiseshell then it’s most probably from a hawksbill so don’t buy. Surprising really, hawksbills quite often look a bit shabby. The overlapping scales allow algae to grow giving them a slightly fuzzy look.

Hawksbills feed mainly on sponges and anemones, the narrow beak allowing them access to food hidden amongst the coral. They can look like eco vandals as they tear apart the coral to get to food but it’s all a natural process. They’ll also feed on jellyfish and unfortunately sometimes ingest plastic bags by mistake. 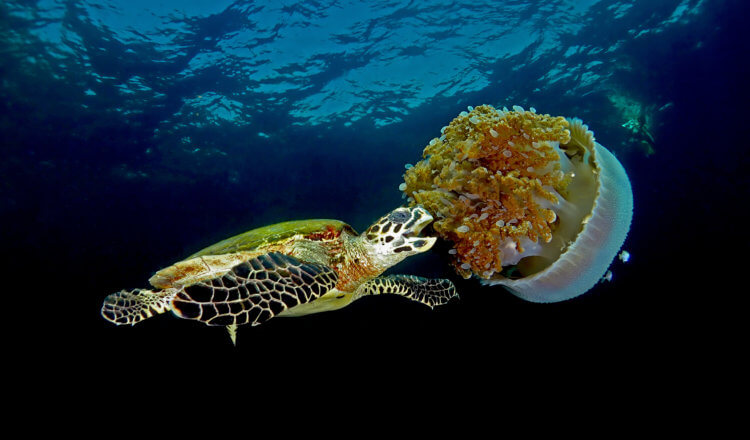 They’re not one of the larger turtles, growing to around 1m in length and 70kg in weight. There’s a huge specimen that lives at Koh Doc Mai that really stretches those limits and must be extremely old.

Hawksbiil turtles are super efficient at nesting. The female can dig the nest and lay her in eggs faster than any other species, in as little as 45 minutes!

Relatively rare sightings around Phuket. Green turtles can be spotted at Kata Beach and begging for bananas at the back of Similan Island liveaboards. They’re named green turtles not because their environmentally friendly sentiments but due to their green fat and cartilage. Once considered a delicacy in many cultures, fortunately attitudes were changed in the 1960’s and so many stopped eating green turtles at ceremonies. Tiger sharks don’t care though and continue to be the nemesis of adult green turtles. 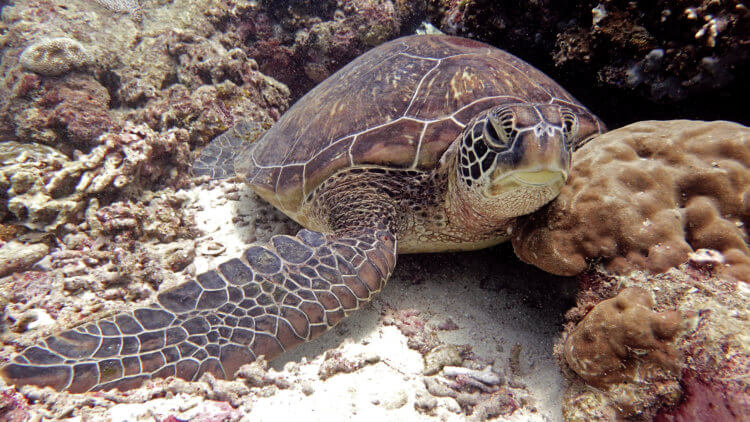 green turtle chilling on the reef

You could also say it’s fortunate for humans, mass poisoning is not unheard of at ceremonies. Entire villages have been known to get critically ill and young children and the elderly have died. The chelonitoxism that causes the illness is not a new phenomenon, villagers have a rather unsavoury way of testing the meat. They will first feed the turtle flesh to cats or dogs to see if the meat is healthy. The toxin is fatal to both cats and dogs…

Green turtles are one of the largest turtles and can grow to 1.5m and reach a weight of 300kg. The diet changes throughout their lifecycle, adults feed on seagrass beds and are the only herbivorous species of the seven. Ecologically very important, grazing on seagrass beds keeps the plants healthy and provides cover for juveniles of many marine species.

How To Tell The Difference

To the trained eye it’s quite easy but occasionally it can be difficult:

For a definitive answer the prefrontal scales in between the eyes are a sure difference. In the below image, on the left the green turtles scales are circled, on the right is the hawksbill. 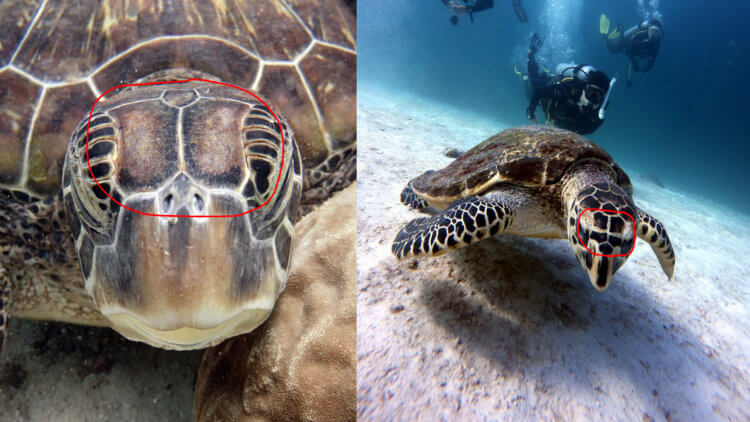 the difference between green and hawksbill turtles

The Best Of The Rest

In truth we rarely if ever see the other species when scuba diving. We know both olive ridley and leatherback turtles nest around Phuket. Olive ridley we do see quite a bit but unfortunately in rescue centre’s, for some reason they’re the species most prone to get tangled in fishing nets especially during our green season (May – October). Every year there’s a turtle releasing ceremony at the Marriott in Mai Khao to return injured or young olive ridleys back to the wild.

Leatherbacks have been causing quite a stir as of late. These huge and largest of all turtles have been nesting again on the beaches around Phuket. Not in great numbers but it’s still a very welcome sight. The Thai authorities have been making great efforts to protect the nests, offering significant rewards for nest sightings. CCTV and barriers have been set up around nests or they’ve been completely moved to safe areas. Well done Thailand! Unfortunately one nest was raided before the authorities got there, unscrupulous egg thieves took every egg. A reward or effectively a bounty has been put on their heads and so we hope to to see the culprits found soon.

If you want to see turtles then you need the best guides and Local Thailand has them in abundance. By far the best opportunity to dive with turtles is the Phi Phi/Shark point trip every Sunday and Wednesday. They can turn up at any dive site so if they’re there we’ll find them! 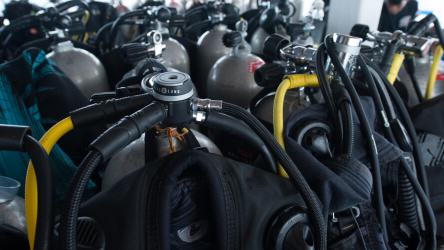 Renting scuba diving equipment on one of our Phuket diving day trip tours couldn't be easier. So if you're not travelling with your own equipment then we can help you out. Our prices for rental equipment are surprisingly cheap. Equipment quality is great so you may consider leaving your own at home. Scuba equipment can be quite heavy and takes a lot of room so if you're just doing a few casual days diving it may be more cost effective to leav [...] 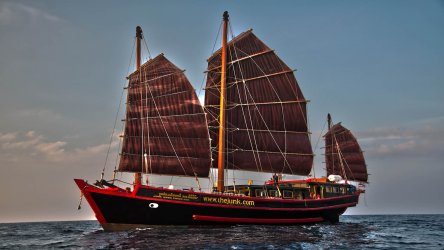 The Junk or June Hong Chian Lee is a very unusual and very special Phi Phi island liveaboard. During the West coast of Thailand low season (May – October) she offers short and very well priced overnight trips to the dive sites around Phuket and Phi Phi. As well as the fantastic Phi Phi Islands you'll get a chance to dive Shark Point, Koh Doc Mai, Racha Noi, Racha Yai and the King Cruiser wreck, a great mix of reef, wall and wreck. Kno [...] 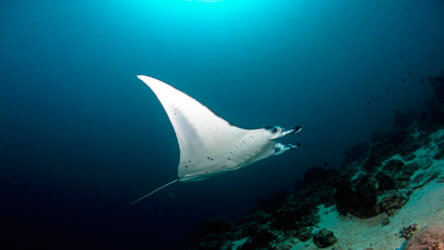 Phuket Manta Rays – What Are My Chances?

Your first diving experience with a Phuket manta rays is something you'll never forget. We're fortunate enough to get regular visits from these gentle giants. They can turn up virtually anywhere but we do have our favourite spots. Let's be clear, you have to be lucky on our local dive sites but it's by no means impossible. As I'm writing this the last week has produced four sightings all at our favoured spot. Racha Noi island has a cleanin [...] 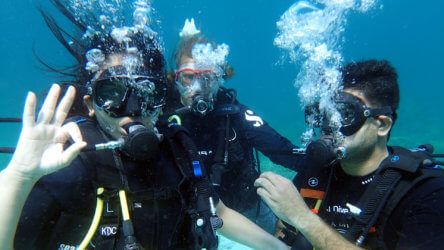 Let's first start by saying that it's not a competition. Having good scuba air consumption doesn't necessarily make you a better diver. If you're ending the dive 20 or 30 bar behind your buddy but still reaching your planned bottom time then it's nothing to worry about and could simply be physiological differences that are extremely difficult to overcome. Having said that we do have numerous instructors around Phuket that can only be describe [...] 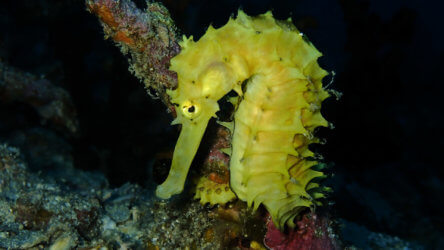 We're very lucky to get at least four different species of seahorse in Phuket. They're not hanging off every branch of coral so our guides have to work hard to find them but find them we do. Some of our Phuket diving trips are seem more attractive to seahorses than others. Anemone Reef, Shark Point and Koh Doc Mai are very productive but for some reason King Cruiser isn't. For the biggest variety of species you can try Kata Beach. Ne [...]