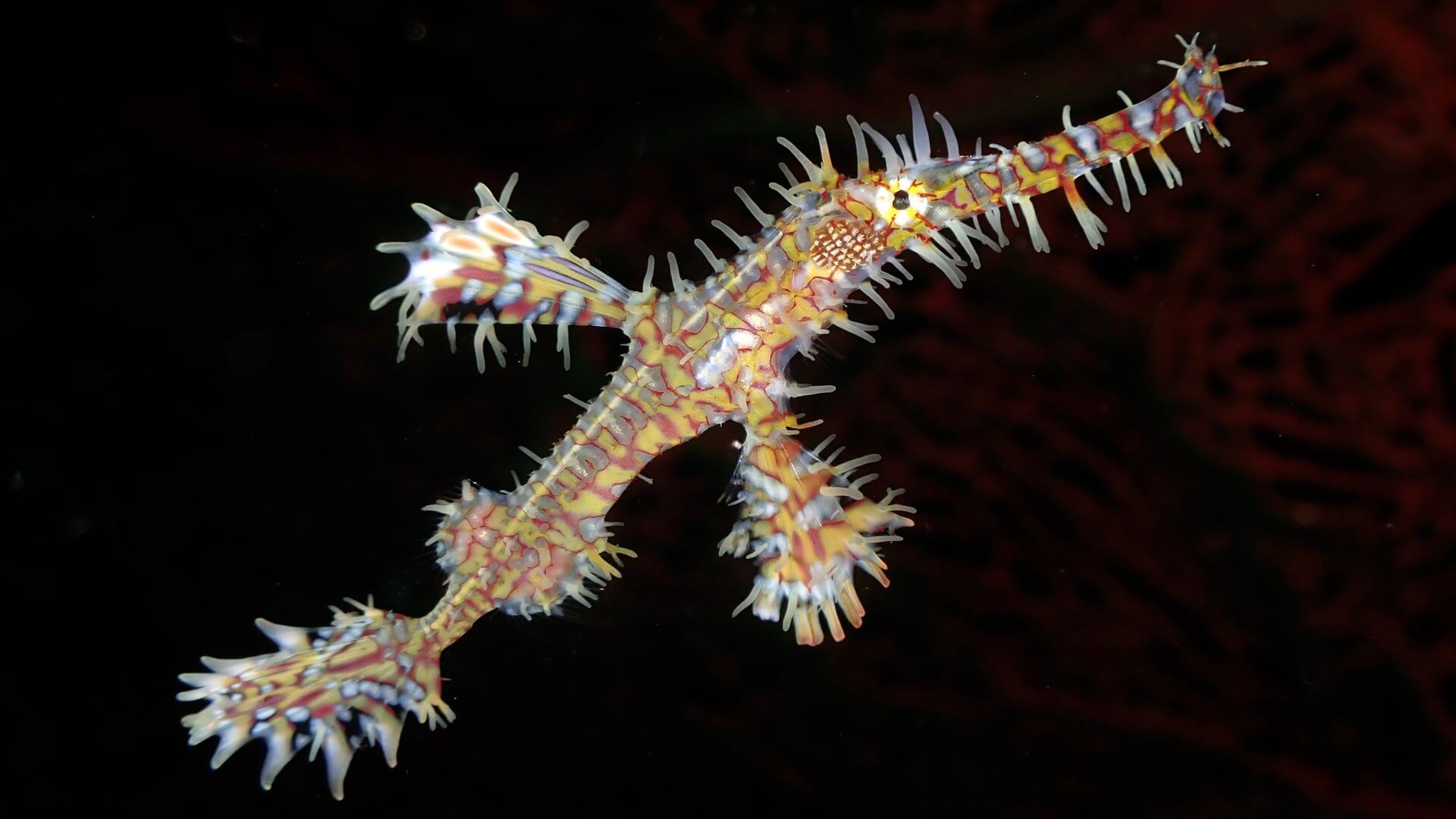 Where Do Ornate Ghost Pipefish Come From?

Ornate Ghost pipefish seemingly appear from nowhere. After months of no sightings they suddenly show up, some years it’s just a few and some years it seems every crinoid has a pair. They spend the first part of their life as plankton, drifting along in ocean currents until the time is right to settle on one of our many reefs. How long they travel the ocean currents is not known but unlikely to be long. They disappear just as quickly as the appeared and that along with their beautiful camouflage is why they’re called ghost pipefish.

The surface ocean currents along the west coast of Thailand do change seasonally. From November to May the current heads up from Sumatra and from May to October down from Myanmar and the bay of Bengal. So we have a rough idea of the direction but no real idea where they hatched from.

Once They’ve Found A Home

We usually find them on crinoids at the Racha Islands or tucked in the base of fan or whip corals at Shark Point. They’ll be almost translucent with little or no colour when they arrive, it will slowly change colour to suit its chosen host. We’ve seen them in white, red, orange, yellow and black colour variations around Phuket. The male and female pairs are generally the same colour. If let undisturbed they will most likely stay in the same place for the duration of what we believe is a very short lifespan.

Ornate ghost pipefish are sexually dimorphic, meaning that male and female have a different appearance apart from the obvious. They also have the ability to change sex when they first settle on a reef. The female is generally the larger of the pair and has large fused pelvic fins for brooding the eggs. Males appear more slender with much smaller pelvic fins that are not fused. Look closely the next time you a female she maybe holding up to 350 eggs between her fins.

The eggs are not always at the same stage of development, so she can release larvae everyday once they’re ready. The young are hatched well developed but only a few millimeters long. After hatching they’ll float along as plankton in the ocean currents to start the process again. 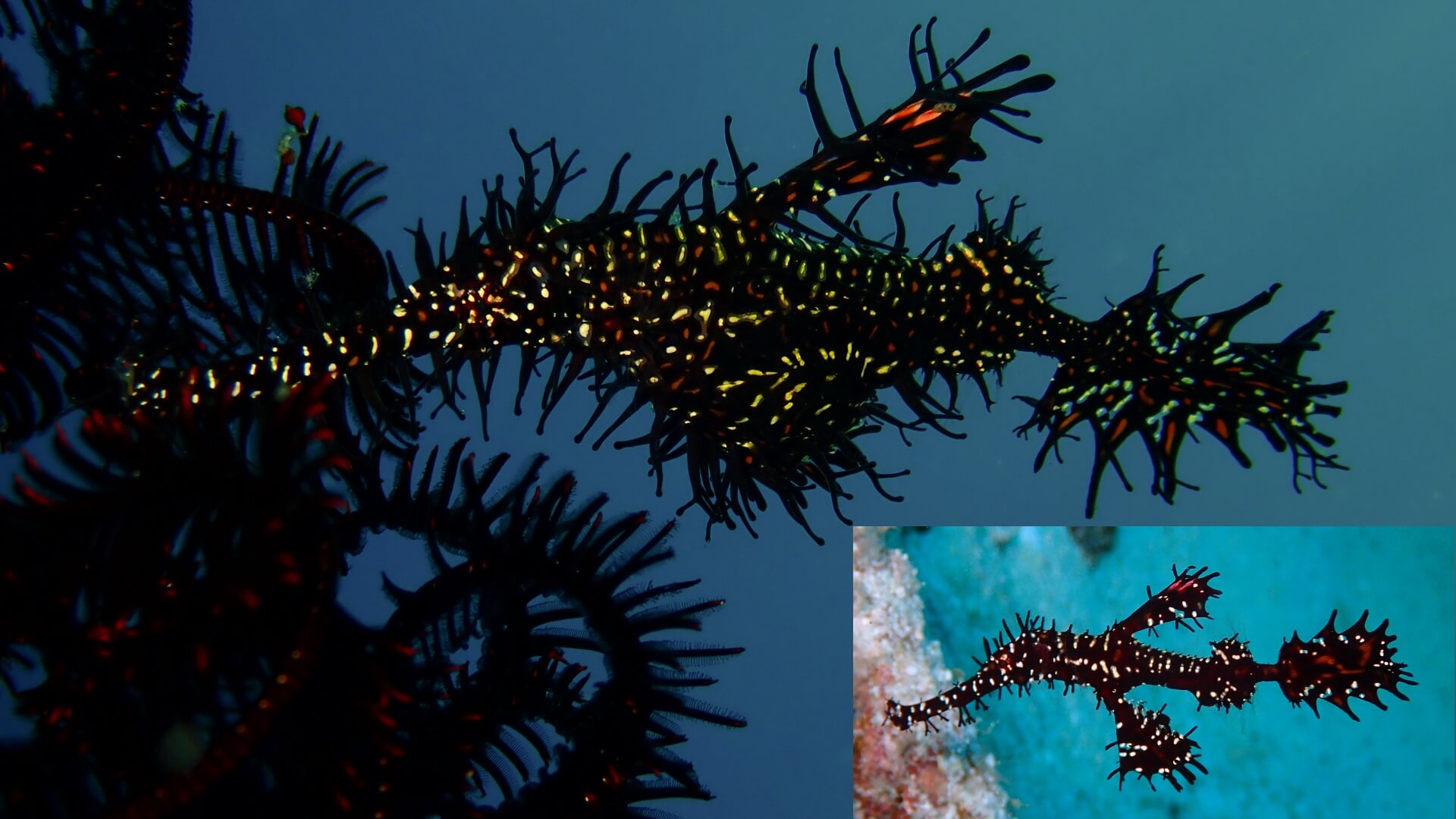 What’s In A Name

Ornate ghost pipefish are also known as Harlequin Ghost Pipefish depending where you are in the world. The latin name – Solenostomus paradoxus roughly translates to marvelous tube mouth, which sounds far better than its given common name. Solen means tube, stoma = mouth and paradoxus means marvelous/unexpected, quite an apt description. The tube like mouth is used to quickly suck up its unsuspecting prey – tiny crustaceans and other plankton.

Surprisingly they’re not true pipefish. Related, but ghost pipefish are in the Solenostomidae family and seahorse and pipefish in Sygnathidae, however they do fall under the wider Sygnathiformes order.

With true pipefish, the male broods the eggs either in a pouch or attached to a special patch on the skin. It’s the females that carry the eggs with ghost pipefish. There are other subtle differences and why in some places they’re known as false pipefish.

The hope the ocean currents will one day bring some of the other species to Phuket but for now we’re happy to have the most brightly coloured and ornate of the ghost pipefish family a regular visitor on our Phuket reefs.

Of course you’ll need the best guides to find them and fortunately we have plenty! 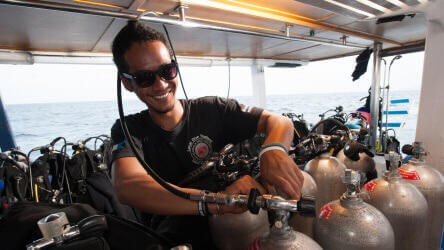 We take our job as a leading diving tour company very seriously. You could argue we are the best at what we do here in Phuket, providing safe, reliable, fun and dedicated scuba diving tours to Thailand's best dive sites and most pristine reefs. But that is not going to stop us from improving further or prevent us from doing everything we can to make your customers, or your day one to be remembered! Below is our company philosophy, sometimes r [...] 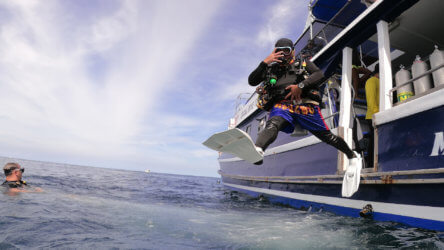 Officially from the 01st June, we'll be able to take MV Kebsup out to our local dive sites. The Thai government has finally given the green light for us to go diving again. Although a relief, there is still a plethora of hoops to jump through for even domestic tourists to get to Phuket. The latest news is that Phuket international airport will open from 15th June but such statements have been made before only to be retracted at the last minut [...] 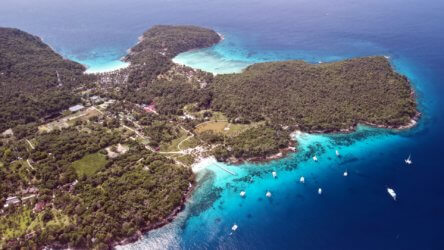 How Much Does Scuba Diving In Thailand Cost

The cost of scuba diving in Thailand will vary depending on location, type of dive centre and in some respects yourself. Phuket probably offers the best all round diving in Thailand but it's also amongst the most expensive. It's not simply that we think you should pay more for better diving, simply down to logistics. Apart from a few really nice beach dives, most of our recognised dive sites are over an hour journey from port. You'll find [...]

An Advanced Open Water in Phuket gives plenty of adventure dive options. So it can be difficult choosing the right ones for you. Your experience level, chosen venue and conditions on the day can all help narrow down your choices. Deep and Navigation are compulsory dives on the PADI Advanced Open Water in Phuket or anywhere else. So that will leave you with three more adventure dives to complete the course. The Deep dive will take you t [...]